Venetian and South Korean cuisines have few commonalities, but one of them is their love for sun dried Pollock (bacala' in Venetian, and 북어구이 in Korean). This recipe combines some traditional ingredients from this distant regions to generate something unique and remarkably tasty.

된장 is one of the most famous Korean sauces, a distant cousin of the well known Japanese Miso. It is a paste, fermented to obtain a delicious umami flavor. Traditionally it was sold as bricks, but nowadays you buy it inside practical jars or plastic containers. 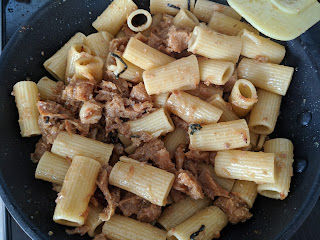